Web Summit is a tech event that has grown astoundingly fast in the last few years. Founded in 2010, it has a remit across multiple industries – from auto to finance, edtech to medtech. Now the largest tech conference in the world, it attracted 60,000 visitors to Lisbon for four days in November 2017.

A major part of the proposition of the event is networking, but how on earth do you facilitate that in such a large-scale event? I attended Web Summit as an ordinary delegate and made more connections than at many expo style events I’ve been to previously.

This article explores how Web Summit encourages communities to form around the event and what lessons can be learned by other B2B event organisers. 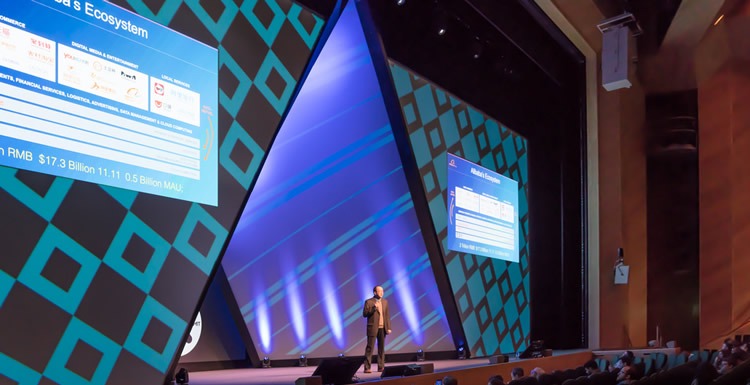 Web Summit has specific areas and sub-events to serve these different communities and help them achieve their goals.

Web Summit are proactive email marketers, with lots of speaker announcements throughout the year and weekly emails in the last couple of weeks. They like to create hype about price promotions and run plenty of flash sales. The Women in Tech tickets initiative was launched in March, with tickets offered at 10% of face value. Web Summit claim that 14,000 Women in Tech tickets were sold (out of 59,000 total tickets) during this promotional period.

A large factor in enabling networking was the Web Summit app. This was launched a couple of weeks in advance of the conference and the incentive to complete a delegate profile was a draw to get tickets for the opening night (only 15k seats and 60k delegates). As well as having full schedules across all conferences, the app also features a chat function to allow messaging to all other delegates.

Delegates had to be using the app in order to register for the event. Once at the event, anyone could use the app to scan another delegates badge and capture their details for later download. The app would also make personalised recommendations for contacts based on uploading individuals’ Twitter, Facebook, Angel List and Github contacts. In spite of being used by 60,000 people simultaneously, the app performed well and messaging was as fast as text messaging or WhatsApp.

At the end of each conference day a drinks party event, Sunset Summit, was staged in an adjacent building, with Portuguese music, food and a pay bar. Each evening, Night Summit – which organisers claim is where the “best of Web Summit’s networking happens” – took over a different part of the city for informal drinking and networking.

Several sponsors and commercial partners organised side events and parties, which were also promoted via daily emails.

Side events self organised on social platforms

Delegates were invited to specialised Facebook groups a couple of weeks before the event, which were moderated by a Web Summit staffer. I was on a promotional Women in Tech ticket, and there were 6000 people on the Women in Tech Facebook group – so there was plenty of activity. People posted about specific areas of interest and organised their own meet ups, drinks and meals. Other delegates set up interest groups on Facebook, Slack and Whatsapp for more spontaneous gatherings. It was sometimes a bit hectic keeping tabs on all these platforms during the day, but it did present plenty of opportunities to find delegates with shared interests.

The Facebook groups and Web Summit app were still open a couple of weeks after the event, allowing people time to follow up contacts and convert them via LinkedIn and email. The Women in Tech Facebook group is still very active, with several posts a day.

In the follow up marketing emails, just a few weeks after the conference ended, Web Summit offered a chance to sign up for a “2 for 1” voucher code for a flash sale for 2018’s conference. Organisers claim that 1000 “2 for 1” tickets were sold in 10 minutes – all helping to fuel the hype that Web Summit remains the event to attend.

Web Summit didn’t get it right all the time, but they were clearly doing their best to facilitate relevant networking. For instance, their main email campaigns were generic, not segmented, but the Facebook groups encouraged self-organised networking.

Lessons for other B2B event organisers

Carolyn Morgan advises media businesses on their digital strategy. She has launched, acquired and run B2B conferences and consumer events so she is a very picky delegate!

Follow her on twitter @carolynrmorgan
Read her blog (including a series of articles on web summit) at www.penmaen.media

Insights from MPG's team and community

Copywriting: how every B2B marketer can improve this skill set

Get email notifications from MPG about new blogs, webinars, training opportunities and other resources in B2B marketing focused on communities, memberships, subscriptions and events.